Welcome back to another two hours of diverse space psychedelia from around the world!  Today’s show is in some ways an extension of last week’s show, and in some ways a divergence.  Again, the music spans space (countries, continents), and 46 years of time.  The space age/space race was such a cultural phenomena in worldwide that it left the mark of its influence on music, film, and literature, which we will see represented in today’s playlist; featuring bands from England, Croatia, Germany, Sweden, Japan, and Portugal.

My partner and I had the great privilege of seeing the Sun Ra Arkestra at the Chicago Jazz Festival this year; the 100th year anniversary of WWI and Sun Ra’s 100th birthday!  It was an amazing performance, and ended the Festival with a blast into the cosmos.

As I said in the last post concerning “Space Is the Place,” this song, too, is from the 1974 film Space Is The Place.  The movie was filmed, and the soundtrack was recorded, in 1972.

Heavy Spacerock from Gothenburg, Sweden.  Also, did you know that Yuri Gagarin was the first human to journey into outer space?!  He was a Russian-Soviet cosmonaut.  I love that word.  Cosmonaut.  Long live The Naked Cosmonaut and the Tivoli Starship! 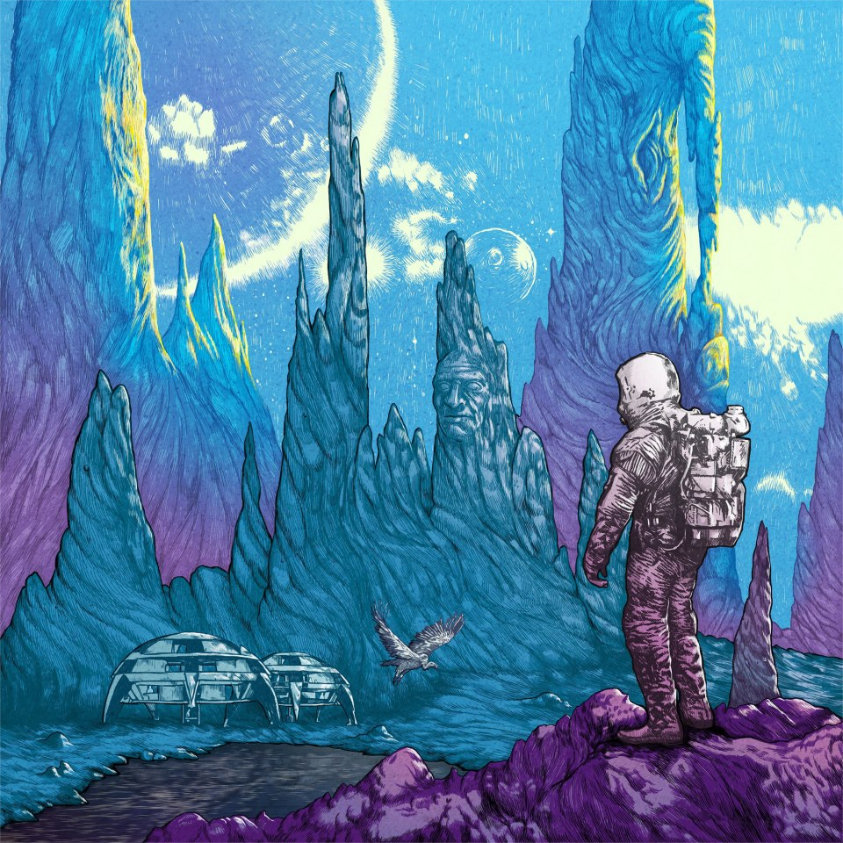 One of my favorite Kosmische bands, hailing from Heidelberg, Germany, began in 1968 and released their first album, UFO, in 1970.  They’re still making music.  Most of it is awesome.

Seven That Spells – Cosmoerotic Dialogue With Lucifer – Space of Eights – 2014

Spacey Prog Psych rockers from Zagreb, Croatia are musically ambitious.  They’ve even teamed up with Acid Mothers Temple for this album!  Problematically, like Acid Mothers Temple, they have an image of a (“sexy”) naked woman on each of their album covers.

You can find their music on Bandcamp with the link above.  This is what they have to say for themselves:

“Beyond. We are the dogs of the western Jazz society looking for dope.
Modern, aggressive psychedelic wall of sound incorporating polymetrics and occasional Viking funeral rites; hailing from the 23rd century where rock is dead, Seven That Spells returned in time where it’s still possible to change the tragic course of the boring history.”

You want information about this band?  Good luck finding it via the “official” music sites.  The great blog Underground Psychedelia posted this about the super trippy Lightdreams project:

“The Lama of Acid archives recomended this album and what he said intrigued me to take a listen… Well the cover has a chessey New Age space prog vibe going on  BUT… This is solid dreamy US style acid folk on a psych trip with spacey ambitions… Yes thats a huge difference. If you take a dreamy out there US acid folkie, who has gone a bit too far for his own good (not a bad thing in itself..) and combine that with 70’s psych rock and wild hardrock fuzz leads a’ la Bob Smith.. but included with all matter of spacey like effects  ( but never really leaving psychedelia). This album has all the makings of a collector monster when it gets it’s well overdue attencion.. Amigos spread this on ya blogs hint hint. Have a stellar psychdelic trip with this underground gem. Yes Paul Marcano is the mastermind behind this goodie. Bless him.”

I’m proud to be playing a fellow Boisean on this show, Trevor Powers.  Speaking of which, if you’re ever in Boise you should check out Tyler Walker’s psychedelic radio show at 1AM on Radio Boise KRBX 89.9 FM.

Idaho is psychedelic, so is this music.  Thank you Trevor!

Sonic assault like a sun flare melting your face.  Yes, they’re from Lisbon.  Yes, that’s in Portugal. Buy their music, or download it for free on their Bandcamp page.

Unfortunately for Sundial, they were too late for the ’60s/’70s and too early for the ’00 British psychedelic revival.  In the U.S. the ’90s were great years for new psychedelic and shoe gaze music, but Sundial’s first album, Other Way Out, didn’t do well at the time. Lucky for us, they kept making music.